Last Tuesday I woke up, made coffee, and sat on my couch scrolling through Google alerts about national monuments. One article I pulled up mentioned that public meetings were being held for the management plan of the new Grand Staircase-Escalante monument. I looked at my calendar. The first meeting was Wednesday, the very next day. I felt a rush of adrenaline that had nothing to do with caffeine: I had to be there. I am passionate about national monuments. For the past year I have been visiting, researching, and writing about the monuments that Trump slated for review. Grand Staircase is one of the more controversial monuments, and one that the president has reduced in size by almost half. So I spent an afternoon tossing camping gear into the back of my car and at 4 in the morning I started on the 8 hour drive to Kanab, Utah.

The meeting was not what I expected. I emerged from my stuffy car into the warm sunshine and fresh air of the desert. I walked into Kanab Middle School, anticipating a town hall-style meeting where people stand up and express their opinion. I secretly hoped it would get contentious, that I could witness people’s passion. Instead, the meeting was arranged to inform people about the planning process and the issues being considered in the new management plan, as well as to encourage comments. The school’s gymnasium was arranged with different stations, each staffed by a BLM employee directed to answer questions but forbidden from expressing personal opinions. Each station addressed a different issue:

Finally, there was an area where you could submit a written comment or give a verbal comment to a court reporter.

I walked through each of the stations, looked at maps of different resources, and talked to each of the employees.  My first stop was the planning process station, where I spoke with a woman named Allyson. She was young, I’d guess late twenties or early thirties, and physically fit. She was wearing Prana jeans and sneakers with her official BLM logo button-up shirt. I pegged her as an ally, though she did not volunteer her own opinion on the situation. She introduced me to the planning process and the new monument boundaries and then walked me through what the different management zones such as Wilderness Study Areas (WSAs) and Areas of Critical Environmental Concern (ACECs) mean. WSAs are areas being considered for a Wilderness designation, which only Congress has the power to do. The upshot is that all of these zones will continue to be managed as Wilderness, whether inside the new monument boundary or not, until Congress makes a definitive decision. ACECs are also areas within Bureau of Land Management (BLM) property that get special protection. According to the BLM website, “ACEC designations highlight areas where special management attention is needed to protect important historical, cultural, and scenic values, or fish and wildlife or other natural resources.”

“Generally the rationale is that a monument designation provides the same amount of protection for an area as an ACEC,” Allyson said “I think we can expect to see a lot of nominations for ACECs in the area that is now outside of the monument. We’ll’ get nominations for areas where we have sensitive plants or high scenic value, etcetera.”

“Can anyone nominate those?” I asked.

“Yeah. Any member of the public can say ‘I care about this, I want to nominate this.’” She paused. “A really good comment letter, I’ll just be frank with you, requires a lot of research.”

The most important point I learned from the meeting was this: all the land excluded from the monument remains under the management of the BLM, so it does not become private land, which seems to be what many people fear. However, the protections of that land are different than if it were still in the monument. National monument proclamations list specific “objects to be protected,” which can be anything from scenic vistas to endangered species to historic sites to unique rock formations. The management of national monuments is developed with the protection of those specific objects in mind. Standard BLM land manages for multiple uses: recreation, resource development, and conservation. But that land will not be managed with the protection of specific things in mind.

Here is a small example: the original Grand Staircase-Escalante proclamation listed biological soil crust, also known as cryptobiotic soil, as an object to be protected. This soil is composed of a community of living organisms: lichens, mosses, fungi, algae, and bacteria. It benefits the landscape by preventing erosion, discouraging the growth of invasive plants, and storing water for the plants that do grow nearby. Grand Staircase-Escalante is managed so that it educates visitors on these facts and instructs people not to trample the crust. Trails, roads, camping, and other access points to the land within the monument are managed with the protection of this crust in mind. Without the monument protection, new areas of development or off-road access could be put into place without concern for the life and preservation of these crusts.

Obviously, there is a lot more at stake here than soil crusts.

So here’s the deal: creating a land use management plan is complicated. For a common citizen who is not an expert on policy, the process feels bewildering and convoluted. It seems to me that the public comment process actually excludes the opinions of regular people, because the required knowledge base for leaving a “substantive comment” is so high, most people will be unable to submit a comment that adds value to the planning process. I left the meeting determined to have a say, even if it required a lot of research and work. Now that I have put in the time to learn what it takes to leave a good comment, I want to share this information so that anyone else who is equally as interested and invested can also share their views. So here it goes:

This is going to take some work.

First, a caveat: writing a good comment takes work. You will need to spend some time researching maps and thinking through your ideas. Unfortunately it is not so simple as letting a policy expert prepare well-researched text so that others can sign their name to it. An effective comment will require more time.

However, in today’s political climate I am often searching for what small actions I can take to make a difference. This is one small thing, and it is something that I care about, so it is worth the time investment. I hope that you feel the same.

Form letters tend to get lumped into one single comment.

The public comment process is not the same as voting. Filling out and submitting a form letter rarely makes a difference. It does not matter how many people submit a form letter expressing opposition or support, those letters will all get lumped into one comment to be considered. A single well-reasoned and well-supported comment makes vastly more difference than thousands of form letters.

Comments must be substantive. The more specific the better.

Though it matters that people say they care about public land, that experiencing nature changed their life, and that they believe nothing about the monuments should be changed, these types of comments don’t help offer guidance to the management planning process. In order to influence the way the land will be cared for, a comment needs to be specific in the issues it raises and offer evidence. Here are some guidelines for how to make your comment substantive:

As an example, if you were concerned about mining taking place in a certain region, you should mention that specific area in your comment and list other resources in that area, either biological, scenic, or cultural, and explain why you think those resources should be protected.

Next week comments are due for both of the recently adjusted monuments in Utah, Bear Ears and Grand Staircase-Escalante. I have compiled a little bit of information about each of these monuments and included links for you to find more information to help inform your own comments. It is my hope that many people will take the time to put together thoughtful comments that will represent the views of the public. This is our chance to have a say in what happens to our land.

Since the original Bears Ears National Monument, as designated by President Obama, did not yet have a management plan in place, this planning process is only addressing the two smaller units that President Trump established. It is not addressing management of the land that was included in the original monument boundary that is now excluded from the monument. All of that land remains BLM land and will continue to be managed as it was previous to being included in a monument. Here is a map with the new monument units in blue and red:

President Trump’s December 4th executive order reduced the boundary of Grand Staircase-Escalante National Monument by 45%. He has redrawn the boundary to become three smaller monuments: the Grand Staircase Unit in the west, the Kaiparowits Plateau in the center, and the Escalante Canyons Unit in the east. Here is a map showing the original boundary (black outline) and the three smaller units (in tan). 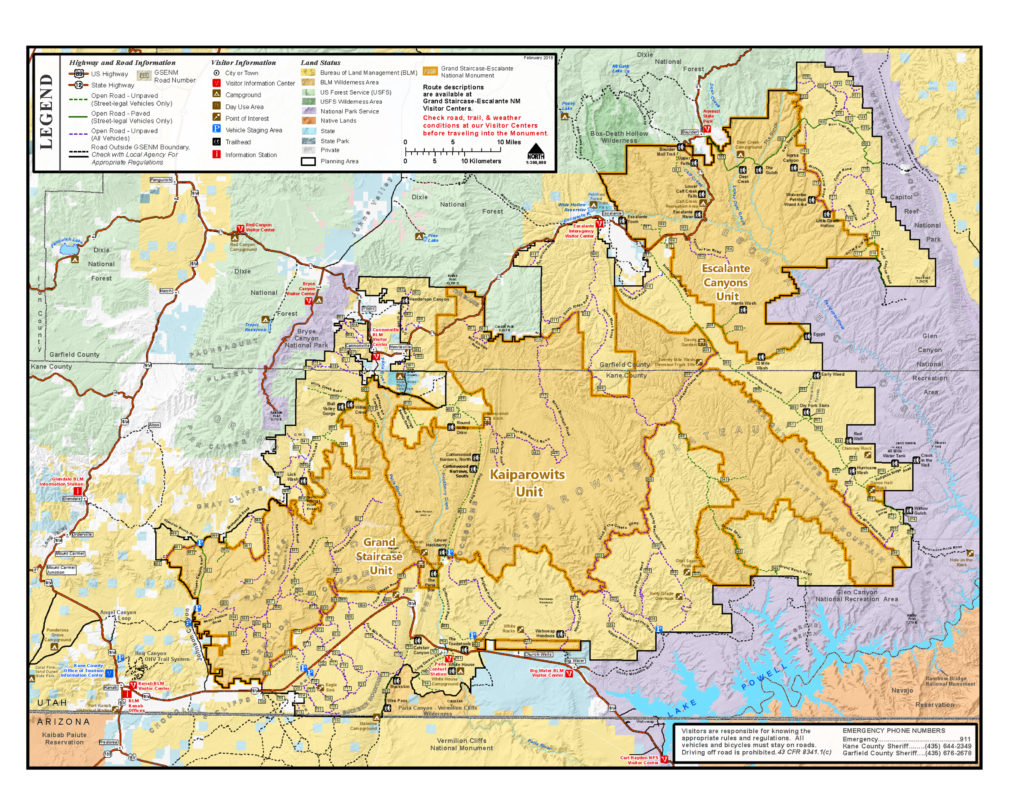 Since this monument was originally designated in 1996 and has been operating under a management plan since 2000, this planning process is creating new plans for not only each of the three monument units, but also for all the land that once was in the monument and is no longer included in the boundary. Comments for this management plan can pertain to areas within or without the new boundaries.

Most Contaminated Nuclear Site in the US: Hanford Reach

Fingerprints in the Mortar: Gila Cliffs